The experience of numerous concerts at which I have performed and am performing as a soloist, chamber musician and flutist, as well as orchestral traversist, deeply convinces me that co-creating music is my passion. I am currently performing with early music chamber ensembles, nationally and internationally. 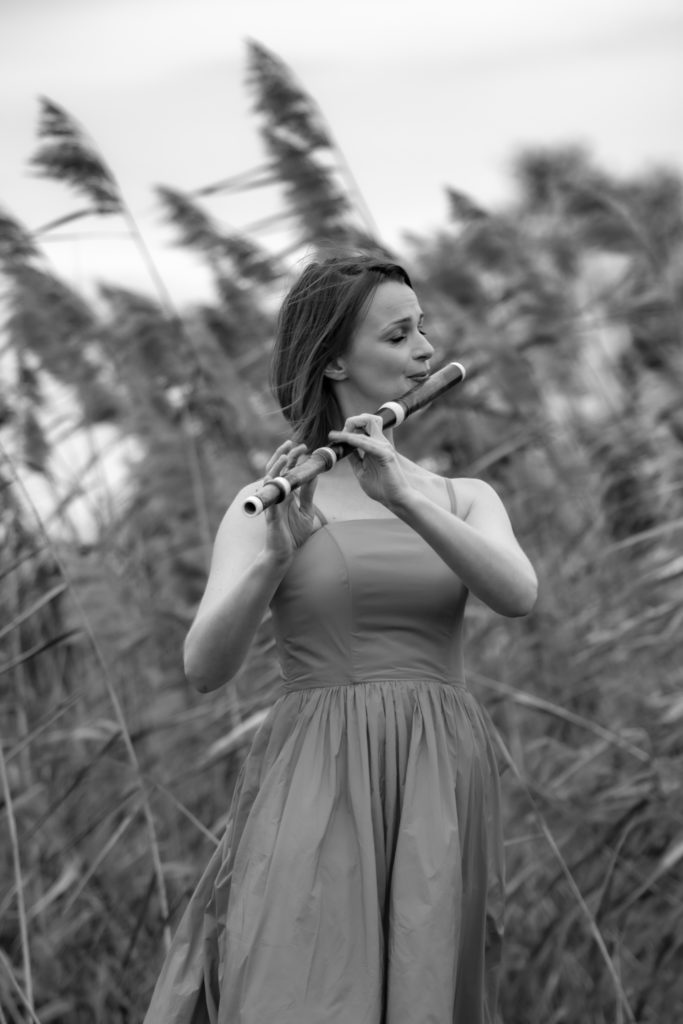 I began my early music studies in 2013, in the traverse flute class conducted by Magdalena Pilch at the Academy of Music in Wrocław.
That same year, I was granted a scholarship at the Royal Conservatory of Music in The Hague, where I studied with the world’s leading authorities on the traverse flute – Wilbert Hazelzet and Catherine Clark. I also honed my skills in master classes conducted by Bathold Kuijken and Patrick Beuckels. I am a graduate of the Academy of Music in Wrocław and Poznań. Since 1996, I studied contemporary flute under the guidance of Ransom Wilson, Peter Lucas Graf, Janos Balint, Philipp Bernold, Jean Pierre Rampal.
Read more…

My fascination with the low-tuned traverso flute and Magdalena Pilch’s artistic passion for performing French Baroque chamber music resulted in our collaboration that began in 2018.

We perform French Baroque music in low French tuning a – 392-400Hz on copies of three-part and four-part French transverse flutes from the late 17th and early 18th century. Our repertoire includes pieces en trio, published in Paris during the reign of Louis XIV, performed on two traverso flutes accompanied by the harpsichord. We perform in the following line-up: Magdalena Pilch, Agnieszka Gorajska – traverso flutes and Marek Pilch – harpsichord. 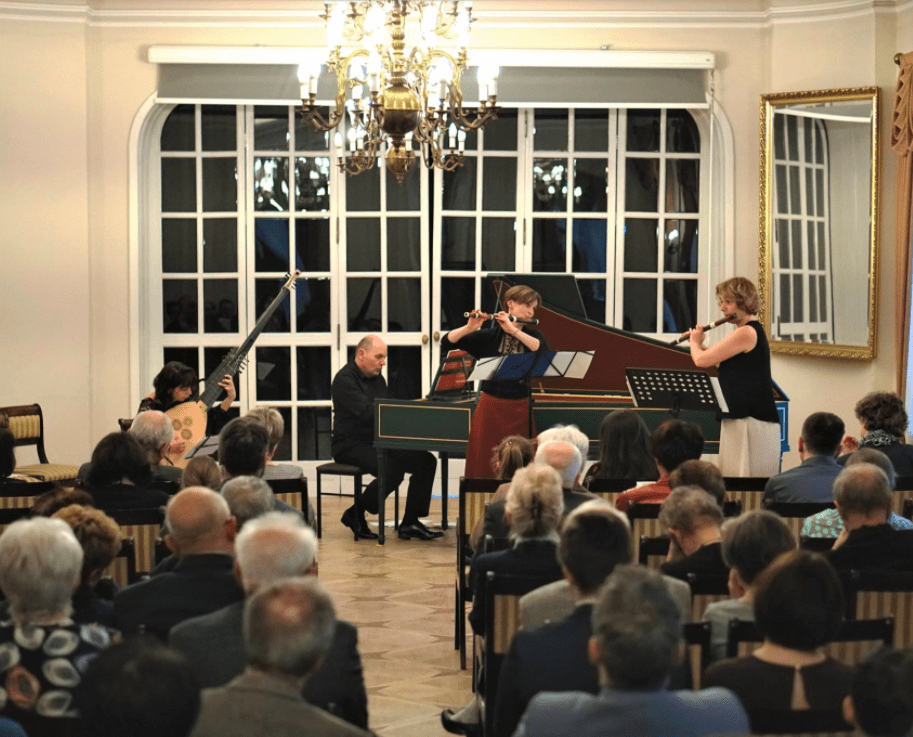 Since 2009, she has been employed at the Grażyna and Kiejstut Bacewicz Academy of Music as a teacher in the traverse flute class, where she initially worked as assistant professor and currently holds the position of a professor of the Academy. Her doctoral dissertation entitled The sound and intonation of Renaissance, Baroque, Classical and Romantic flutes as a factor dependent on the intended construction of the instruments of those epochs (Łódź 2007) constituted the first attempt in Poland at a comprehensive approach to the subject of the history of pre-Boehm transverse flutes based on historical sources.

In 2013, she conducted the procedure for a conferment of a postdoctoral degree at the Karol Szymanowski Academy of Music in Katowice, entitled A comprehensive vision of the Romantic flute in terms of construction, sound, playing technique and performance practice according to Die Kunst des Flötenspiels in theoretisch – praktischer Beziehung dargestellt von A.B. Fürstenau Op. 138. As a result of her fascination with the topic of her habilitation procedure – chamber repertoire from the first half of the 19th century and Romantic flutes – she recorded two CDs released by RECART (Flauto brillante 2011 and Brillante 2 2015).

Magdalena Pilch plays the Renaissance, Baroque, classical and romantic flute. She is the founder of La Viva Fiamma, the only transverse renaissance flute consort that is currently active in Poland, and a co-founder of an early music ensemble, Filatura di Musica. Since 2013, she has also been the editor-in-chief of a scientific and artistic bi-annual journal, “Notes Muzyczny” (notesmuzyczny.pl), published by the Faculty of Instrumental Performance of the Academy of Music in Łódź.

Born in Cieszyn. Marek Pilch studied simultaneously at the Academy of Music in Katowice in the organ class of Professor Julian Gembalski and in the harpsichord class of Professor Marek Toporowski. He continued his postgraduate studies at the Hochschule für Musik in Trossingen (Germany) as a holder of the DAAD scholarship. He received an honourable mention at the 1992 International Organ Competition in Gdańsk, and was a finalist in the 1997 International Harpsichord Competition (NDR) in Hamburg. In the years 1998-2000, he conducted courses in harpsichord music interpretation and basso continuo performance at the Bohemia Festival in Kostelec, Czech Republic.

He has been involved in the musical activities of the Evangelical Church in Poland. He was a co-editor of the “Evangelical Songbook”. (Augustana, 2002), and a co-author of “Choralnik”. (published by Augustana, 2005). In the years 2000-2005, he was an organist at St. Christopher’s Church in Wrocław. In 2002, he founded the Evangelical Institute of Sacred Music in Wrocław. He has cooperated with the Polish-German Association for Research and Maintenance of the Silesian Organ (VEESO) as well as the Internationale Heinrich Schuetz Gesellschaft.

In 2011-13, together with the Museum of the History of Katowice, he led a series of Concerts on a Vintage Piano, devoted to interpretations of piano and chamber music performed on an Ernst Irmler piano from 1860. In 2013-15, he gave a series of lectures at the Fryderyk Chopin University of Music in Warsaw as part of a course entitled “Protestant Hymnology”.

He is currently teaching and conducting concert activities as an organist, harpsichordist, and chamber musician. He collaborates with early music ensembles and leads his own chamber ensemble, Trio Brillante, in which he plays a historical table piano. He works as an assistant professor at the Department of Harpsichord and Historical Performance Practices at the Academy of Music in Katowice. In 2011, he received the title of a Doctor of Arts.

In 2014, the enchantment with the rich stylistics of mature Baroque music as well as the desire to share its refined beauty with contemporary audiences led to the formation of the Aetas Baroca ensemble in The Hague, with which I perform on music stages in Poland and at international early music festivals. 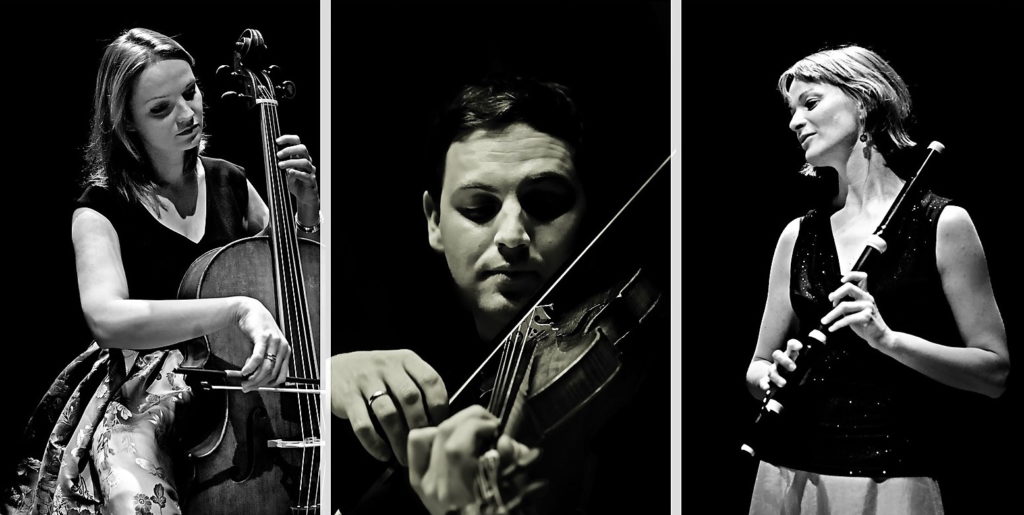 As instrumentalists, we work on each element of the piece, emphasizing the importance of Baroque music in its rhetorical dimension. We are particularly interested in the theory of eighteenth-century affect, musical interpretation of gestures derived from the world of movement and baroque dance – which had a huge impact on the shaping of the music of that time. Attention to stylistic ornamentation and musical rhetoric makes enables our listeners to take a brief journey into the age of splendour and costume.

Due to the presence of the traverso flute and the baroque cello, we concentrate on performing Italian, German, and French music of the late Baroque. Thanks to Aetas Baroca, the interiors of Polish, Czech, German, and Dutch cathedrals and castle halls can yet again resound with the works of Jean-Philippe Rameau, Antonio Caldara, Georg Philipp Telemann, Claude Galbastre, Johann Sebastian Bach, Jean Barriere and others.

The ensemble’s unique sound is the result of our deep interest in the stylistics of an era that produced three distinct, simultaneously emerging currents: the ornate Rococo, the airy and orderly Gallant, and the heralded Romanticism of Sturm und Drang. As sincere enthusiasts and lovers of early music we wish to bring it closer not only to connoisseurs, but also to those for whom Baroque music is something completely new. We are practicing educators, and apart from giving concerts we also run workshops on early music for children and teenagers, to show them the colourful possibilities of early instruments and get them interested in in this mysterious epoch in the history of music.

Paweł Miczka is a graduate of the Hochschule für Music und Theater in Leipzig in Roland Baldini’s class. There, he also began his Baroque violin studies with Susanne Scholz. It was in Halle that he completed his pedagogical studies and began working at the music school . Subsequently, he went on to study at the largest early music department in Europe, the Royal Conservatory of Music in The Hague in the class of Enric Gatti.

Aleksandra Rybak-Żymła is a graduate of the Katowice Academy of Music in Piotr Janosik’s cello class and the Royal Conservatory of Music in The Hague, in Lucia Swarts’ baroque cello class. She has been involved in such projects as: Nederlands Jeugd Orkest, Academia Montis Regalis, Jeune Orchestre de l’Abbaye, The Fat Lady Opera Groep or Handel Academy. In 2014-2015, she was a member of the Theresia Youth Baroque Orchestra active in Italy. She had the opportunity to work with such teachers as Alison McGillivray, Christophe Coin, David Simpson, Jaap ter Linden, Balazs Mate and Hidemi Suzuki. In 2014, she began working with the Aetas Baroca ensemble. She also collaborates with the Orchestra of the Academy of Early Music Foundation. Since 2016, she has been the cellist of the ensemble of historical instruments at the Lublin Philharmonic.