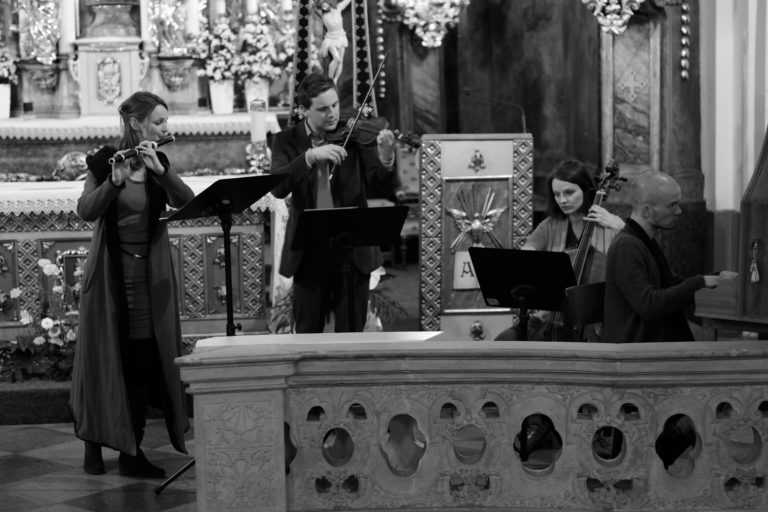 The fascination with Baroque music and the willingness to showcase its refined beauty to contemporary audiences is what inspired these four musicians and launched their joint adventure on the stages both in Poland and around the world, as part of international festivals of Early Music.

The Aetas Baroca group was founded in 2014 in Hague, where its members explored the secrets of historical performance practices at the Royal Conservatory of Music. They are all instrumentalists who, while working on each element of the piece of music, wish to emphasize the importance of Baroque music in its rhetorical dimension. They all share a specific interest in the eighteenth-century affect theory and musical interpretation of gestures from the world of movement and Baroque dance, which had a big influence on the music of that time. What is more, their unique care of stylistic ornamentation and musical rhetoric allows the listener to go on a brief tour of the age of glamour and extravagance.

Thanks to the presence of the traverso flute and Baroque cello, the group focuses on performing Italian, German and French music of the late Baroque. With their every performance the interiors of Polish, Czech, German and Dutch cathedrals and music halls are filled with music by Jean-Philippe Rameau, Antonio Caldara, Georg Philipp Telemann, Claude Galbastre, Johann Sebastian Bach, Jean Barriere and others.

The group’s unique sound comes from the members’ shared passion for the style of the Baroque era, which is composed of three very different, yet simultaneously developed streams: the decorative rococo, the ethereal and orderly gallant and proto-romantic Sturm und Drang. As sincere enthusiasts and lovers of early music, the group wishes to share the joy of it not only with the connoisseurs, but also with everyone who has not had much contact with it.

The group members also work as teachers who, besides performing, give workshops for children and young people on early music with an aim to present the tone colour possibilities of ancient instruments and to encourage young people’s interest in this mysterious time in the history of music.